Surgical interventions for endometriosis may be recommended if other methods, such as pain medications or hormone therapy, are not alleviating symptoms like pain or infertility. Surgical procedures can be risky and lead to life-altering side effects, which is why they are not the first line of treatment used for endometriosis. It’s important to note, however, that there is no cure for endometriosis at this time. Even after surgery, endometriosis-related symptoms and pain may return, and fertility improvements made as a result of surgery may eventually decline again. It has been estimated that roughly 20% of women who have conservative endometriosis surgery experience symptoms again within two years, and around 40% or more may experience a return of symptoms within five years post-operation.1,2 Some experts suggest utilizing hormone therapy along with surgical interventions or after surgery to potentially decrease the rate of symptom recurrence.2 Some common surgical procedures for endometriosis are below. 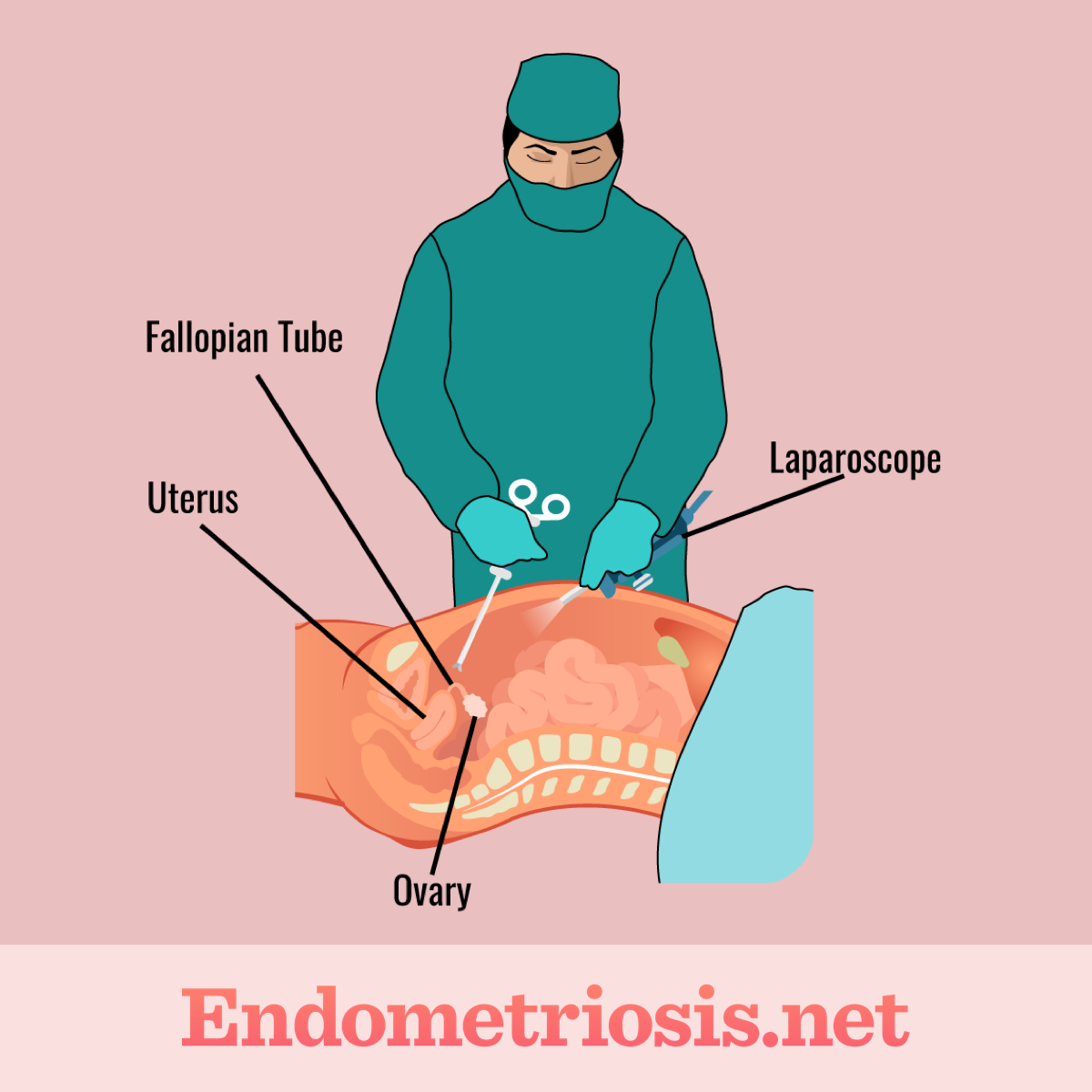 Laparoscopic surgery (also referred to as conservative surgery), is a minimally invasive procedure that is used to diagnose endometriosis, as well as to remove endometriosis lesions or scar tissue. It’s possible that an individual may experience pain relief or fertility improvements after lesions or scar tissue are removed. Laparoscopic surgery is also used to address ovarian cysts, in a procedure called a cystectomy.3

If your surgeon finds endometriosis lesions or scar tissue (also called adhesions) that need to be addressed, they will attempt to remove or destroy them. In some cases, these lesions may be able to be removed, in a process called an excision. During an excision, a lesion or scar tissue will be excised, or cut, and removed from the body. In some cases, a lesion or scar tissue may be removed using extreme heat or energy. A lesion or scar tissue is said to be ablated when high heat is used to melt it away (also referred to as coagulation). Further breaking down the technique of ablation, lesions can be melted away and destroyed using lasers (vaporization) or electrical current (fulguration). Your surgeon will inform you on what procedure they plan to use during your laparoscopic surgery, and how their approach may impact your recovery. When addressing a cyst (cystectomy), the mass may be cut out, partially removed, or drained.3-5 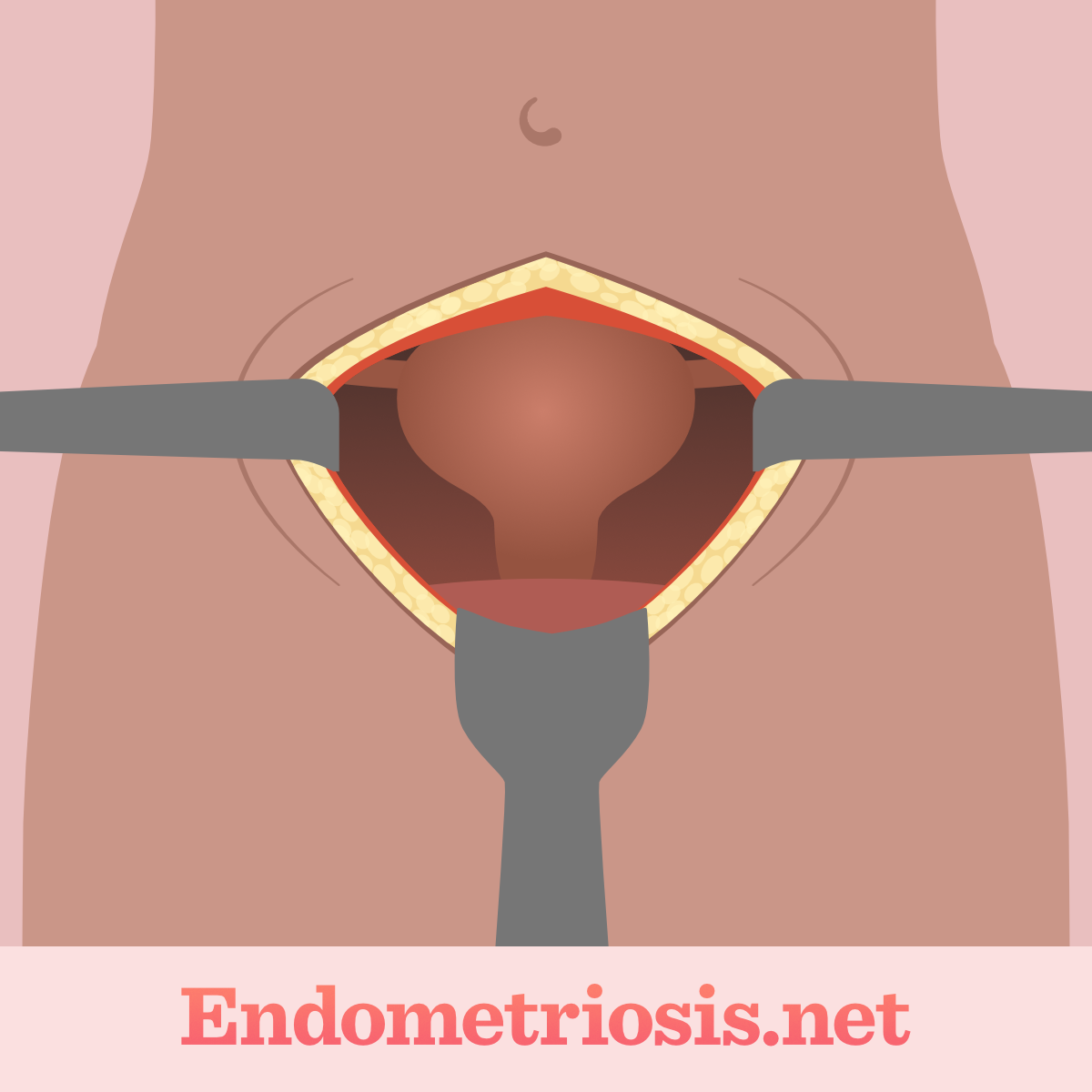 A laparotomy is a surgical procedure in which a large incision is made in the abdomen in order to view and address issues within the abdomen and pelvis. Laparotomies are infrequently used at this time. Instead, most surgeons and providers will opt for laparoscopic surgery, if possible. However, not all women are able to have a laparoscopic surgery depending on the nature of their endometriosis and their personal medical history. If your provider recommends surgery, but you are unable to have a minimally invasive laparoscopic procedure, they may suggest a laparotomy instead.

Once your surgeon makes the incision, they will be able to view the inside of your abdomen and pelvis. From there, they may remove endometrial-related cysts, called endometriomas, from the ovaries. Ultimately, as much endometriosis is removed as possible during this procedure to hopefully relieve pain and other endometriosis-related symptoms. Bands of tissue (also called adhesions) within the pelvis may be removed in order to help improve fertility. There are more risks associated with undergoing a laparotomy for the treatment of endometriosis when compared to laparoscopic (minimally invasive) surgery. This is because a larger incision is made and the procedure has a longer recovery time.6-8

A hysterectomy is a surgical procedure that involves removing the uterus. Hysterectomies may be recommended for the treatment of a variety of conditions, including uterine fibroids. Some women with endometriosis receive a hysterectomy after all other efforts to control pain and endometriosis-related symptoms have failed to provide relief. However, it’s important to note that at this time, there is no cure for endometriosis. Not even a complete hysterectomy can guarantee that the condition will never return.

It’s possible that during the procedure, not all endometriosis lesions will be removed. It’s also possible for new lesions to grow in different areas after the procedure. Because of this, it has been estimated that pain returns in as many as 15% of women who undergo radical hysterectomy, where the uterus, cervix, ovaries, and other surrounding structures are removed. This recurrence rate increases as more structures are left in the body, such as the ovaries. A hysterectomy directly leads to infertility, which is why it is often a last line of defense against endometriosis pain and symptoms, especially in younger women who may want to have children in the future. Additionally, the removal of the uterus and the ovaries can lead to life-impacting side effects that may need to be regularly managed well after the surgery.9-11

Other surgical interventions: LUNA and PSN

In addition to the previously mentioned procedures, there are other surgical techniques used for endometriosis. Of significance are two procedures aimed at relieving pain by destroying nerve fibers in the pelvis. These procedures are called laparoscopic uterine nerve ablation (LUNA) and presacral neurectomy (PSN). The major difference between these procedures is in which nerves they are targeting. In theory, by destroying certain nerve fibers in the pelvis, a woman’s pain perception may be altered, thus, reducing her overall pelvic pain levels. More research is needed to determine the long-term efficacy of these procedures, however, preliminary studies have suggested that PSN may more effective at reducing pain long-term than LUNA.12 If you are interested in LUNA or PSN, consult your healthcare provider to find out if these procedures are appropriate in your specific case.